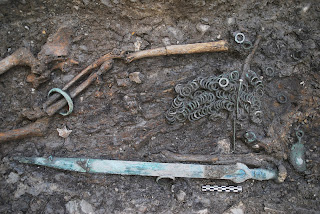 Workers digging the foundations for a new car park have unearthed the burial site of a Bronze Age warrior, revealing a rich source of artefacts including a sword, jewellery and other ornaments.

The tombs were discovered in Sion, a town in the French-speaking part of Switzerland. The artefacts were dated between 850 and 400 BC – a period when the Bronze Age was giving way to the second Iron Age.

A bronze sword with an ivory pommel was discovered among the remains of an adult male, along with numerous other ornaments, including a razor.