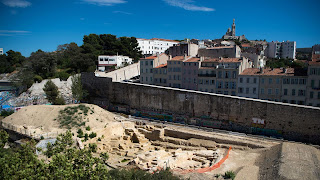 The Greek quarry dating from the 5th century BC in Marseille is going to be partly classified
as a Historical Monument [Credit: AFP/Bertrand Langlois]

Discovered by chance during the construction of a building in the center of Marseille, a Greek quarry dating from the 5th century BC will be partly classified.

This represents a first victory for the residents against the French city’s authorities who were planning to build on the historic site, according to a report by French Agency, AFP.

“It’s a great step forward,” exclaimed with a smile a resident of the Sandrine Rolengo district where the quarry was discovered.

Minister of Culture Françoise Nyssen, who visited the site recently, decided to protect part of the site.