Stonehenge may have served as a cremation cemetery


Towering above the grassy Salisbury Plain, its eerie rock monoliths are steeped in myth and magical stories, yet despite decades of research, the original purpose of Stonehenge remains a mystery. 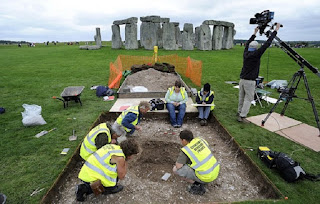 Archaeologists excavated the burned bones that had been previously dug up from around  the site of Stonehenge during the 1920s. They say analysis suggests the site  was used as a cemetery
[Credit: Adam Stanford/Aerial-Cam Ltd]

A new study by archaeologists, however, has suggested the imposing stone circle may have initially been used as a cremation cemetery for the dead.

Charred remains discovered on the site were unearthed in holes - known as the Aubrey Holes - that have been found have to once held a circle of small standing stones.

Fresh analysis of the burned bones has revealed they were buried in the holes over a period of 500 years between 3,100BC and 2,600BC.