Archaeologists in Italy have discovered what may be a rare sacred text in the Etruscan language that is likely to yield rich details about Etruscan worship of a god or goddess. 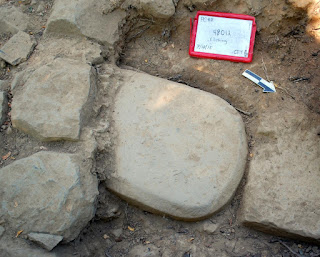 Inscribed stele uncovered at Etruscan temple The Etruscan stele was embedded in the foundations of a monumental temple where it had been for more than 2,500 years [Credit: Mugello Valley Project]

The lengthy text is inscribed on a large 6th century BCE sandstone slab that was uncovered from an Etruscan temple.

A new religious artifact is rare. Most Etruscan discoveries typically have been grave and funeral objects.

“This is probably going to be a sacred text, and will be remarkable for telling us about the early belief system of a lost culture that is fundamental to western traditions,” said archaeologist Gregory Warden, co-director and principal investigator of the Mugello Valley Archaeological Project, which made the discovery.