Researchers at Bournemouth University have developed a new software technique to uncover 'lost' tracks, hidden in plain sight at the world's oldest human footprint site in Laetoli (Tanzania). The software has revealed new information about the shape of the tracks and has found hints of a previously undiscovered fourth track-maker at the site. 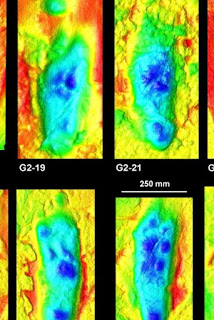 The Laetoli tracks were discovered by Mary Leakey in 1976 and are thought to be  around 3.6 million years old. There are two parallel trackways on the site, where two  ancient hominins walked across the surface. One of these trackways was obscured  when a third person followed the same path [Credit: Bournemouth University]

The software was developed as part of a Natural Environments Research Council (NERC) Innovation Project awarded to Professor Matthew Bennett and Dr Marcin Budka in 2015 for forensic footprint analysis. They have been developing techniques to enable modern footwear evidence to be captured in three-dimensions and analysed digitally to improve crime scene practice.