Six to seven thousand years ago, the road system in Norway was essentially non-existent. That meant Stone Age residents mainly used waterways as they moved from place to place, especially on the hunt. 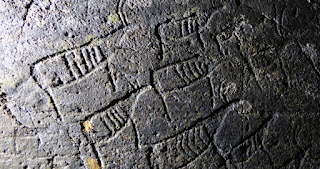 Forty-eight Stone Age petroglyphs include images of a reindeer herd, shown with all the  animals moving in the same direction. It’s possible that the artist was trying to say that  reindeer migrated this way 7,000 years ago
[Credit: Jan Magne Gjerde,  Tromsø Museum - The University Museum]

One area called Gamnes, located between the outlet of a river and the mouth of a fjord that opens onto the Barents Sea, is particularly rich with rock art. There are petroglyphs of reindeer and moose, in herds and alone, with and without young animals.

In general, animals depicted in rock carvings are shown moving in all different directions. But in Gamnes, most of the reindeer have been drawn with their muzzles pointed in the same way.