The discovery of the world's oldest storage of fermented fish in southern Sweden could rewrite the Nordic prehistory with findings indicating a far more complex society than previously thought. The unique discovery by osteologist Adam Boethius from Lund University was made when excavating a 9,200 year-old settlement at what was once a lake in Blekinge, Sweden. 9,200-year-old settlement discovered in Sweden 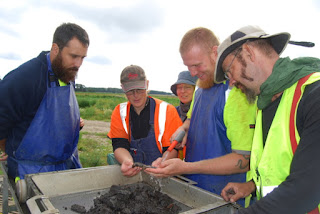 "Our findings of large-scale fish fermentation, a traditional way of preserving fish, indicate that not only was this area settled at that time, it was also able to support a large community," says Adam Boethius, whose findings are now being published in the Journal of Archaeological Science.

The discovery is also an indication that Nordic societies were far more developed 9,200 years ago than what was previously believed. The findings are important as it is usually argued that people in the north lived relatively mobile lives, while people in the Levant -- a large area in the Middle East -- became settled and began to farm and raise cattle much earlier.