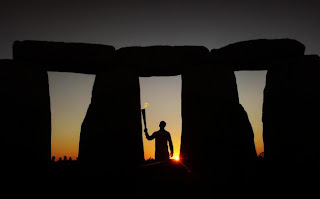 New research overturns the belief that Stonehenge was built as an astronomical calendar or observatory [Credit: Associated Press]

British researchers have proposed a new theory for the origins of Stonehenge: it may have started as a giant burial ground for elite families around 3000BC.

New studies of cremated human remains excavated from the site suggest that about 500 years before the Stonehenge we know today was built, a larger stone circle was erected at the same site as a community graveyard, according to researchers."These were men, women, children, so presumably family groups," University College London professor Mike Parker Pearson, who led the team, said at the weekend. "We'd thought that maybe it was a place where a dynasty of kings was buried, but this seemed to be much more of a community - a different kind of power structure."Parker Pearson said archaeologists studied the cremated bones of 63 individuals, and believed that they were buried around 3000BC. The location of many of the cremated bodies was originally marked by bluestones, he said.