Homeric epics were written in 762 BCE, give or take 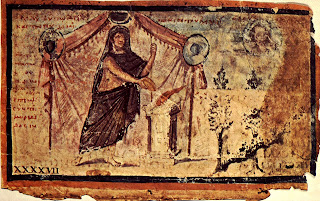 Achilles sacrificing to Zeus, from the Ambrosian Iliad or Ilia Picta, a 5th century illuminated manuscript thought to have been produced in Constantinople [Credit: Wiki Commons]

When were Homer's works written? One of literature's oldest mysteries is a step closer to being solved after a recent study that dates the The Iliad to 762 BCE and adds a quantitative means of testing ideas about history by analyzing the evolution of language.

The epic poem The Iliad, set amid the final year of the Trojan War, is attributed to the ancient Greek poet Homer and is foundational to Western literature, but scholars have not reached a consensus about whether it was written shortly after the war or centuries later. Archaeological and historical evidence have placed the text's origins in the 7th or 8th century BCE, but such records are sparse and often have an uncertain validity.