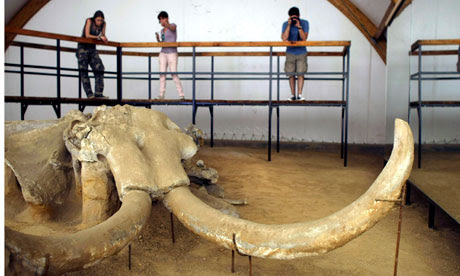 A mammoth recovered from the 'mass grave' at the Kostolac open-pit coal mine about 50 miles east of Belgrade. Photograph: Marko Drobnjakovic/AP

Archaeologists say bones of five woolly mammoths at Kostolac coal pit may reveal more about Balkans several millennia ago
FArchaeologists have unearthed at least five mammoths at a site in Serbia. The discovery last week at Kostolac coal mine, east of the Serbian capital of Belgrade, is the first of its kind in the region and could offer important insights into how the ice age affected the area now known as the Balkans. Miomir Korac, of Serbia's Archaeology Institute, said: "There are millions of mammoth fragments in the world, but they are rarely so accessible for exploration."

"A mammoth field can offer incredible information and shed light on what life looked like in these areas during the ice age." The remains were found during coal excavations about 20 metres below ground. Korac said the mammoth field stretched over nearly nine hectares (20 acres) of sandy terrain. In 2009 a well-preserved skeleton of a much older mammoth was found at the same site. The female skeleton, nicknamed Vika, is up to a million years old and belonged to the southern mammoth type which lacked dense fur.