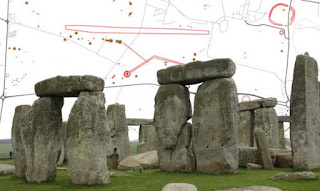 The Stonehenge Landscape is an estate managed by the National Trust in Wiltshire, England, covering 2100 acres within UNESCO’s Stonehenge, Avebury, and Associated Sites designation.
The Stonehenge Landscape contains over 400 ancient sites, that includes burial mounds known as barrows, Woodhenge, the Durrington Walls, the Stonehenge Cursus, the Avenue, and surrounds the monument of Stonehenge which is managed by English Heritage.
DNA studies of the ancestors who built many of the monuments, suggests they originated in Anatolia on the Aegean coast of modern Turkey, and migrated west across the Mediterranean before reaching Britain around 4,000 BC (details of the studies were published in 2019 in the journal Nature Ecology & Evolution). During this period, Britain was already inhabited by small groups of hunter gatherers, that were almost completely supplanted by the migrations.
Read the rest of this article...
Posted by David Beard MA, FSA, FSA Scot at 10:05 AM