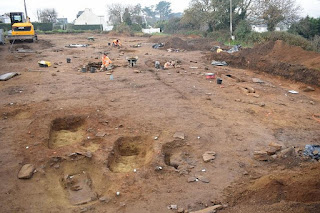 View of the necropolis of rue du Plateau [Credit: S. Blanchet, Inrap]
From October 2020, a team from Inrap has been carrying out an excavation in the commune of Plougonvelin (Finistère) on westernmost tip of Brittany, as part of a future property project. The archaeologists have unearthed an important necropolis dating from the Early Bronze Age (between 2000 and 1600 BC). To date, some fifty burials have been excavated over nearly 1800 square metres. Although other funerary complexes of this type most probably exist in Brittany, this is the first time that the opportunity has been given to study a site of this scale.
It is worth recalling that, at the regional level, work on Early Bronze funerary practices and architectural structures has, since the 19th century, focused mainly on the innumerable Armorican tumuli. Alongside these funerary monuments, burial tombs such as those at Bono in Morbihan (L. Juhel excavation) or Santec in Finistère (Y. Lecerf excavation) are nevertheless known but remain, in the current state of research, less frequent and less documented.
Read the rest of this article...
Posted by David Beard MA, FSA, FSA Scot at 5:37 PM