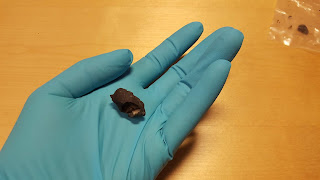 Ancient chewing gums are as of now an alternative source for human DNA and possibly a good proxy for human bones in archaeogenetic studies. The investigated pieces come from Huseby-Klev, an early Mesolithic hunter-fisher site on the Swedish west coast. The sites excavation was done in the early 1990's, but at this time it was not possible to analyse ancient human DNA at all, let alone from non-human tissue. The masticates were made out of birch bark tar and used as glue in tool production and other types of technology during the Stone Age.
Read the rest of this article...
Posted by David Beard MA, FSA, FSA Scot at 4:48 PM