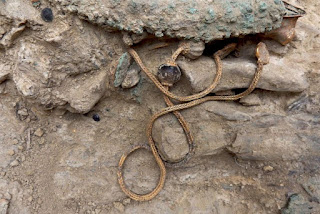 Archaeologists hail the burial, untouched for 3,500 years, as the biggest discovery on mainland Greece in decades.


The text message from the trench supervisor to archaeologists Jack Davis and Sharon Stocker was succinct: “Better come. Hit bronze.”
The excavators exploring a small stone shaft on a rocky promontory in southern Greece had found an unusual tomb of an ancient warrior. The burial may hold important clues to the origin of Greek civilization some 3,500 years ago.
Along with the well-preserved skeleton of a man in his early thirties, the grave contains more than 1,400 objects arrayed on and around the body, including gold rings, silver cups, and an elaborate bronze sword with an ivory hilt.
Read the rest of this article...
Posted by David Beard MA, FSA, FSA Scot at 3:34 PM