A hilltop tomb recently discovered close to the edge of Tievebaun mountain on the Sligo/Leitrim border may be more than 5,000 years old , according to the archaeologist who found it. 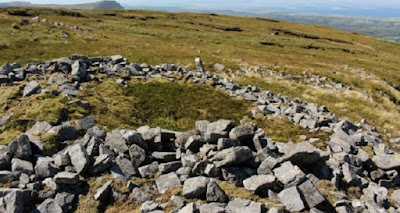 Michael Gibbons said a series of discoveries in this area – including animal enclosures, field systems, and booley settlements – suggests that there are layers of history spanning the Neolithic period, the iron age, the bronze age and the post medieval period on these uplands.

Mr Gibbons, who discovered other tombs in this area a decade ago, said that the hilltop tomb, which was a sacred site up to 3,500 BC, was probably not discovered before now because of its dramatic setting on the edge of the mountain.