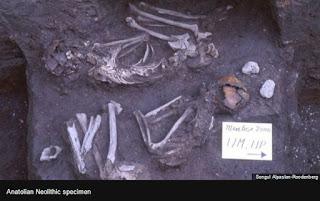 A study of ancient DNA has shed new light on European genetic history.
It confirms that farming spread across Europe due to the influx of ancient people from what is now eastern Turkey.
Many modern Europeans owe their taller stature to these early farmers - and a later influx of Bronze Age "horsemen" - say international researchers.
In the study, researchers mapped the genes of 273 ancient people who lived in West Europe and Asia from about 8,500 to 2,500 years ago.
Of these, 26 were part of a population that gave rise to Europe's first farmers.
Prof Ron Pinhasi of the School of Archaeology at University College Dublin, a lead researcher on the study, said: "We now have the first clear evidence that agriculture in Europe started with the first farmers coming from what is now Turkey.