As gold jewellery goes, it could be considered to be quite modest, but a 6,600 year old pendant discovered at the site of one of Europe's oldest prehistoric towns may be the world's oldest bling. 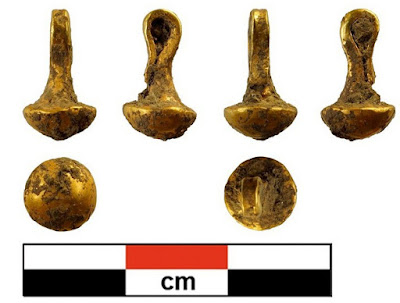 The tiny two-gram pendant was discovered during excavations at the archaeological site of Solnitsata in the Varna region of Bulgaria.

Archaeologists believe the area may have been part of an advanced prehistoric society that was among the first to work out how to process and produce gold goods.

The necropolis at Solnitsata, which means 'Salt Pit', is situated just to the north of the Bulgarian city of Provadia.