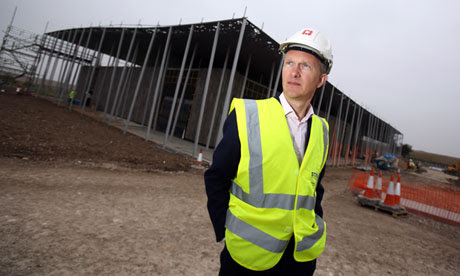 The English Heritage chief executive, Simon Thurley, outside the soon-to-be-completed Stonehenge visitor centre. Photograph: Matt Cardy/Getty Images
On 18 December, a mere 24 years after the parliamentary public accounts committee denounced the visitor facilities at one of the world's most famous ancient monuments as "a national disgrace", and 85 years after the idea was first mooted, a new £27m visitor centre will open atStonehenge.
For the first time there will be a museum-quality gallery interpreting the site and displaying original finds, as well as a cafe and shop. There was a distinct air of incredulity among many of the English Heritage staff, bruised and battered survivors of decades of debate, funding rows, public inquiries and planning consultations, sites identified and then abandoned, grandiose plans announced and promptly cancelled, landmark dates including the millennium and the Olympics missed, even as they stood in hard hats and hi-vis jackets in the shadow of the almost completed building.
Read the rest of this article...
Posted by David Beard MA, FSA, FSA Scot at 6:20 PM