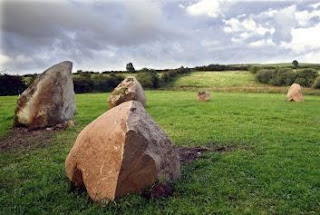 Standing still: The stone circle at Wilton, near Egremont, restored after more than 200 years


The circle was discovered in a meadow at Wilton, near Egremont by landowners Philip and Lyndsey Johnson. And according to Dr Terence Meaden, a research archaeologist from Oxford University, the stones could be over 4,000 years old.
The formation was unearthed when the Johnsons began researching the history of their house.
They came across an 18th century map with a drawing of the old stone circle in a field close to their home. It was marked “Druids Temple”.
Further investigation showed the stones were probably moved by a farmer around 1800. The stones were found in a nearby hedge.
Read the rest of this article...
Posted by David Beard MA, FSA, FSA Scot at 5:18 PM