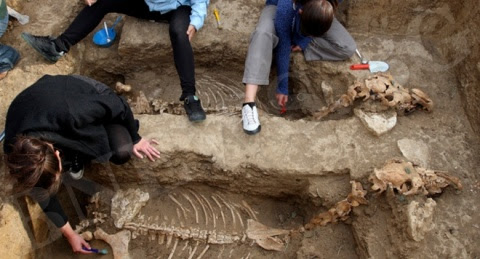 Archaeologists have uncovered the remains of a Thracian carriage and two horses that appear to have been buried upright.

The chariot and horse skeletons are 2,500-years-old and were discovered in the village of Svestari in north-east Bulgaria.

The two-wheeled carriage and carcasses of the horses were found in a Thracian tomb along with some decorations.

Professor Diana Gergova of the National Archaeology Institute at the Bulgarian Academy of Sciences, who led the dig, said: 'The find is unique, it is not resembling any other carriage dating from the Thracian era ever uncovered in Bulgaria.'