Worm poo's window into past climate 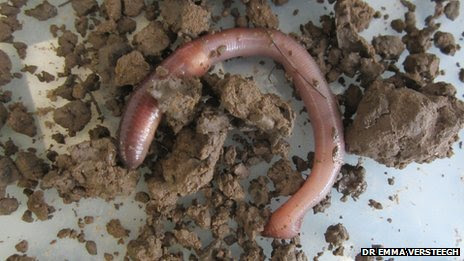 The worm secretions may act as a "self-produced indigestion tablet"


Earthworm faeces can be used to measure past temperatures, providing a window into the ancient climate.
A study shows that the chemistry of small balls of chalky crystals secreted into soil by the worms varies with temperature.
A UK team said the granules could be compared with other climatic "proxies", such as ice cores and deep sea sediments.
Details appear in the journal Geochimica et Cosmochimica Acta.
Scientists from the universities of Reading and York report that the calcium carbonate (calcite) nodules dug up from archaeological sites give a unique measure of the ancient local temperatures.
Because the ratios of different isotopes, or forms, of oxygen within the calcite crystals vary with temperature, they record the conditions present as they grow inside the worms.
Read the rest of this article...
Posted by David Beard MA, FSA, FSA Scot at 11:28 PM