Prehistoric cave art in the Dordogne


Caves in the Dordogne's Vézère valley contain some of the oldest artworks known to man. Robin McKie enjoys the visit both below – and above – ground 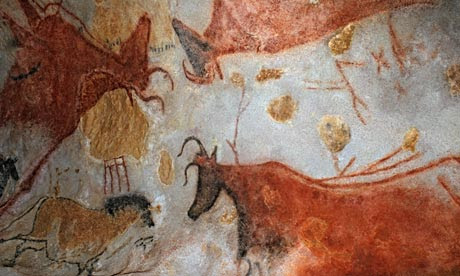 Off the wall: a close-up view of cave art in the Vallee de la Vezere.
Photograph: Jean-Daniel Sudres/Corbis

At some point in remote prehistory, roughly 12,000 years ago, a group of men and women – no more than half a dozen, scientists believe – crawled into the labyrinth of Rouffignac cavern in the Dordogne's Vézère valley. Once in its deepest recess, they lay on their backs and, in flickering candlelight, started painting on the rock ceiling 3ft above them. More than 60 images of mammoths, horses and ibex were outlined, each animal depicted in simple, confident lines that reveal startling artistic talent.
This is the Great Ceiling of Rouffignac, one of the world's oldest and most beautiful art galleries. We have few clues as to who created it, though it was probably the work of the Cro-Magnons, the first members of Homo sapiens to settle in Europe 45,000 years ago and survivors of the Ice Age that later gripped the continent. Nor do we know why these artists picked such an inaccessible spot to display their genius – though fortunately it can be reached easily today. A tiny electric train runs from Rouffignac's entrance to the Great Ceiling, the floor of which has been lowered to allow visitors to gaze up at its wonders.
Read the rest of this article...
Posted by David Beard MA, FSA, FSA Scot at 12:55 PM