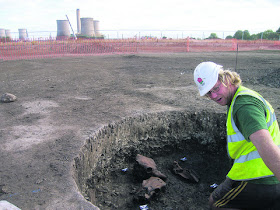 Archaeologists have proved for the first time that people started living in the Didcot area as early as 9,000 years ago.

Oxford Archaeology has been excavating land at Great Western Park, where more than 3,300 homes are being built, to detail the site’s history.

The two-and-a-half-year dig has uncovered the remains of a Roman villa, and early Bronze Age arrowheads which will now go on display.

Rob Masefield – director of archaeology at RPS Planning, which is managing the investigation – said one of the most important discoveries was hundreds of flints dating back over 9,000 years to the Mesolithic period.

Read the rest of the article...