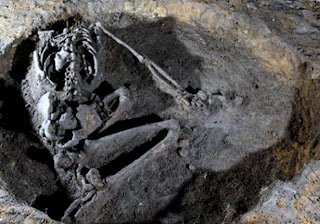 The skeleton found on the old allotment land at Soham [Credit: Cambridge News]

Experts from the Hertford-based firm Archaeological Solutions are currently excavating a Roman settlement on land off Fordham Road, before 96 homes are built on the site.Among the wealth of artefacts found are a number of human burials thought to predate the Roman settlement, including one where the person was decapitated before being put in the ground.

Andrew Peachey, a specialist in prehistoric and Roman pottery at the company, said: “Prior to the Roman settlement, the margins of the Fen and island [of Ely] were heavily exploited by prehistoric settlers, including one who appears to have been decapitated before being placed in a crouched burial in a circular pit.