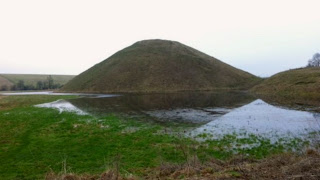 Trespassers on a rain-soaked monument in Wiltshire are causing "spectacular" damage, an archaeologist has warned.

Heavy rain has led to standing water around Silbury Hill in Avebury and very soft ground which is being eroded by people climbing the monument.

Jim Leary, an archaeologist for English Heritage, said that illegal climbers on the sodden hill were "leaving some really rather hideous scars".

The hill dates back to 2400 BC and is the largest man-made mound in Europe.

Mr Leary said access to the mound had been prohibited for a number of decades and people should not be attempting to climb it.

"They are going up and it is very wet and they are eroding the side of the hill," he added.