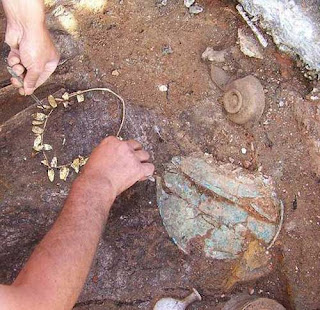 One of the eight gold wreaths which came to light during the Thessaloniki subway works
[Source: ΑΠΕ-ΜΠΕ]

Excavation work during construction of a new subway network in Greece's second largest city has discovered an ancient wreath made of gold that was buried with a woman some 2,300 years ago.

Archaeologists say Friday's find in Thessaloniki occurred on the site of an ancient cemetery in the west of the northern port city.

A total 23,000 ancient and medieval artifacts have been found during archaeological excavations connected with the construction since 2006.