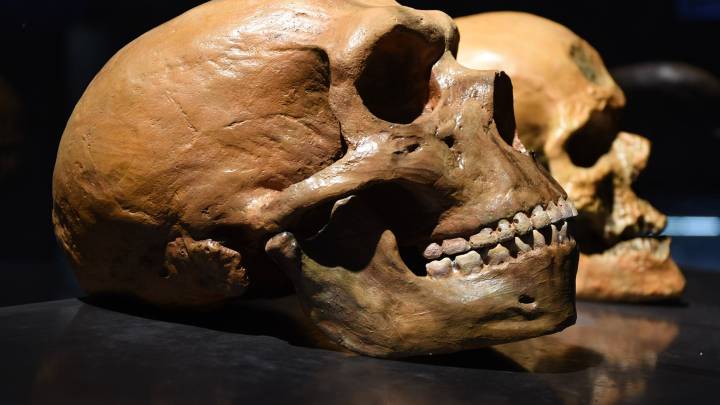 Scientists from Israel stumbled upon an unexpected discovery while studying fossilized pieces of bone dug up near a cement plant. The fragments from a skull and lower jaw with teeth belonged to a person who lived in the area some 130,000 years ago, but the human is unlike anything we’ve known so far.
The researchers gave it a new name since we’re looking at a different species of human that has never been seen before. They’re calling it Nesher Ramla Homo, after a location southeast of Tel Aviv where it was discovered. This human had particular characteristics unseen in other skeletal findings from the same period. The researchers found that Nesher Ramla Homo had a flat skull, very large teeth, and a jaw bone with no chin. The species may have lived alongside Homo sapiens for more than 100,000 years, and they’re believed to be the precursor to the Neanderthal, the skull of which is seen above. The discovery might upend everything we knew about human evolution on Earth.
“The discovery of a new type of Homo is of great scientific importance,” Tel Aviv University’s Israel Hershkovitz said in a statement. “It enables us to make new sense of previously found human fossils, add another piece to the puzzle of human evolution, and understand the migrations of humans in the old world.”
The Nesher Ramla might have had unusual skull anatomy, but the study says they resembled pre-Neanderthal groups in Europe.
“This is what makes us suggest that this Nesher Ramla group is actually a large group that started very early in time and are the source of the European Neanderthal,” Tel Aviv University physical anthropologist Hila May said in a statement. She added that science has never been able to explain how Homo sapien genes were present in the earlier Neanderthal population in Europe. The Nesher Ramla may be the missing link, as the species may have interbred with Homo sapiens.
Read the rest of this article...
Posted by David Beard MA, FSA, FSA Scot at 6:04 PM