The organization of bead production during the Aurignacian has significant implications for understanding the role of these artifacts in Upper Palaeolithic societies, and the evolution of symbolic behavior and social organization more generally. 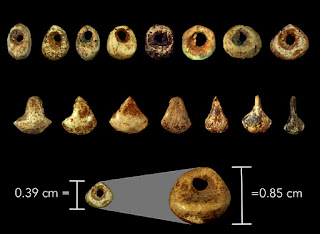 In a special issue of the Quaternary International on The Role of Art in Prehistoric Societies a case study of Early Aurignacian beads in ivory and soapstone are presented, and related production debris, from four sites (Abri Castanet, Abri de la Souquette, Grotte des Hyènes at Brassempouy, Grotte d’Isturitz) in the Aquitaine region of France.

The data from the case study are used to evaluate three hypothetical models of production and exchange in the given regional context, and are evaluated in terms of the current, common criteria for the recognition of craft specialization in the archaeological record.