The Caves That Prove Neanderthals Were Cannibals


Deep in the caves of Goyet in Belgium researchers have found the grisly evidence that the Neanderthals did not just feast on horses or reindeer, but also on each other. 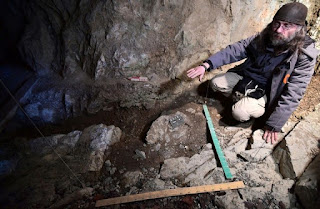 Belgian archaeologist Christian Casseyas shows the latest explored area as he gives a tour of the Goyet cave, where 96 bones and three teeth from five Neanderthal individuals were found

Human bones from a newborn, a child and four adults or teenagers who lived around 40,000 years ago show clear signs of cutting and of fractures to extract the marrow within, they say."It is irrefutable, cannibalism was practised here," says Belgian archaeologist Christian Casseyas as he looks inside a cave halfway up a valley in this site in the Ardennes forest.The bones in Goyet date from when Neanderthals were nearing the end of their time on earth before being replaced by Homo sapiens, with whom they also interbred.Once regarded as primitive cavemen driven to extinction by smarter modern humans, studies have found that Neanderthals were actually sophisticated beings who took care of the bodies of the deceased and held burial rituals.But there is a growing body of proof that they also ate their dead.