Irish motorway dig reveals finds dating back to 3500BC


A ‘mound’ used as a gathering point for rituals dating back to 3500 BC, evidence of medieval treasure-hunting and remains of Famine cottages are among the ancient finds along the M17 motorway. 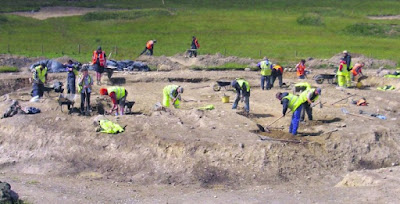 The excavation at Kilskeagh, which found, where a gathering point dating  back to 3500C was uncovered [Credit: Connacht Tribune]

The finds at 26 excavated sites on the 30km stretch from Rathmorrissy (near Athenry) to Tuam have been recorded in a book entitled ‘Through the Lands of the Auteri and St Jarlath’, which will be launched next week.

The book takes its title from the Auteri tribe which controlled large tracts of land in the second century AD in what is now Athenry, and 300 years later, where according to legend, St Jarlath founded Tuam.