A 300-metre section of an ancient carriage way dated to the 4th century BC was discovered by archaeologists at the Megalo Kavouri beach in the southern suburb of Vouliagmeni, the ministry of Culture announced on Monday. 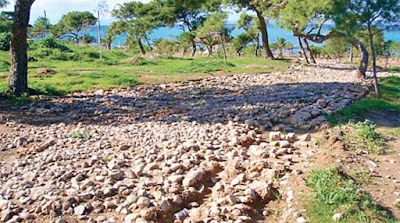 The road, paved with small stones placed close to one another, varies in width from 1.90 metres to 6.10 metres. It is delineated by retaining walls on either side that also serve to keep the pavement stable, as the earth underneath is soft and sandy.