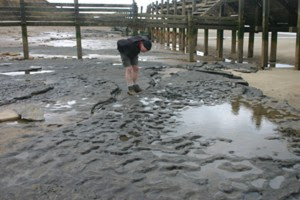 Archaeologists have found the earliest human footprints known outside Africa, at Happisburghon the Norfolk coast.
Dating back 800,000 years, the prints are thought to have been made by five individuals, including both adults and children.
They were identified by a team of scientists led by the British Museum, Natural History Museum, and Queen Mary University of London, after heavy seas removed beach sands to reveal a series of hollows in the silt at low tide.
Read the rest of this article...
Posted by David Beard MA, FSA, FSA Scot at 7:27 PM