Neanderthals 'unlikely to have interbred with human ancestors' 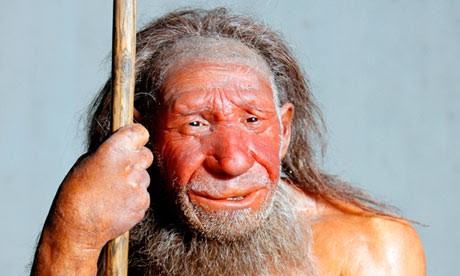 A model of a Neanderthal man from a museum in Mettmann, Germany. Traces of neanderthal DNA can be found in humans today. Photograph: Jochen Tack/Alamy

A new finding has cast doubt on the theory that ancestors of modern humans interbred with Neanderthals over thousands of years. Scientists have re-dated fossil bones from two sites in southern Spain and discovered they are much older than previously thought.
According to the new evidence, it is unlikely Neanderthals and modern humans ever lived together in the region. Researchers now think the Neanderthals had long gone before the arrival of the first Homo sapiens.
Since the 1990s experts have believed the last Neanderthals sought refuge in the Spanish peninsula and died out around 30,000 years ago. That would have provided easily enough time for the Neanderthals to mix their DNA with that of modern humans, who are believed to have colonised Spain more than 10,000 years earlier.