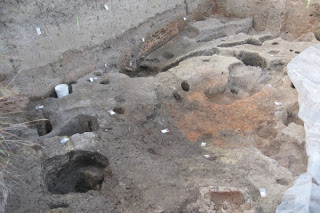 An impressive archaeological discovery was made by a team of archaeologists led by Professor Florin Drasovean on the the highway section Lugoj – Deva in Romania. The 50 tombs discovered in the village of Păru represent the largest necropolis of the Bronze Age found in Romania until now. Specific pottery and stone grinders used in funerary ritual, hundreds of homes in the thirteenth century BC were also discovered by archaeologists.

The research conducted during last summer led to the discovery of more than six sites that date back to the Bronze Age, Roman and Medieval periods on the highway’s segment Belint-Traian Vuia.Specialists from Banat Museum have already studied the pieces discovered so far, and they intend to publish their findings in dedicated monograms.