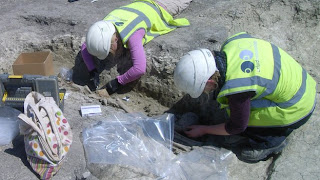 One of the special burials contained what is thought to be a woman and a stillborn baby [Credit: BBC]