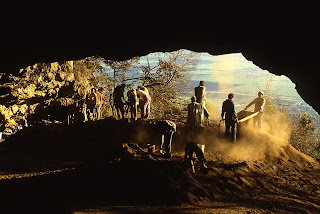 The Later Stone Age emerged in South Africa more than 20,000 years earlier than previously believed -- about the same time humans were migrating from Africa to the European continent, says a new international study led by the University of Colorado Boulder.

The study shows the onset of the Later Stone Age in South Africa likely began some 44,000 to 42,000 years ago, said Paola Villa, a curator at the University of Colorado Museum of Natural History and lead study author.  The new dates are based on the use of precisely calibrated radiocarbon dates linked to organic artifacts found at Border Cave in the Lebombo Mountains on the border of South Africa and Swaziland containing evidence of hominid occupation going back 200,000 years.

The Later Stone Age is synonymous to many archaeologists with the Upper Paleolithic Period, when modern humans moved from Africa into Europe roughly 45,000 years ago and spread rapidly, displacing and eventually driving Neanderthals to extinction. The timing of the technological innovations and changes in the Later Stone Age in South Africa are comparable to that of the Upper Paleolithic, said Villa.