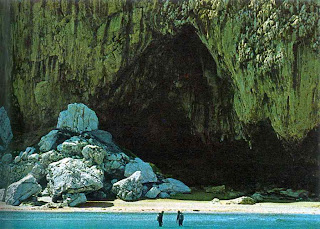 The annual expert exploration of Gorham’s Cave is well under way, but the access to the potential World Heritage Site is an arduous daily trek for the volunteers, as it was for the local media when they were invited to see what was happening down there.

No less than 350 steep and broken steps, with a rickety handrail, have to be negotiated, followed by about 100 metres across the rockiest beach imaginable – a ragged mix of boulders, smaller rocks, and fossilised sand, with no clear path through, which now cover the former Governor’s Beach, the rubble having been thrown there during tunnel excavations in the last thirty years

Our Gibraltar Museum guide, Dr Geraldine Finlayson, told the half-heat-stricken press corps that we were lucky, as the volunteer archaeologists not only have to make the journey twice a day, but they also carry their food, water, equipment, and petrol for the generators down with them, and then lug sacks of samples back up. No wonder they opt to spend their lunch break down there in the shade of the cave’s massive entrance. In fact, all food is eaten outside to avoid contamination of the cave floor.