A Late Mycenaean chamber tomb with grave goods dating to the 13th-12th centuries BCE has been discovered in the centre of the main town on the island of Salamina, Greece, during a project meant to link a home with the central sewage network. 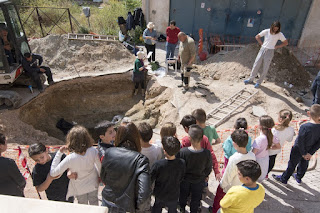 Speaking to the Athens-Macedonian News Agency (ANA) on Friday, archaeologist Ada Kattoula of Western Attica, Piraeus and the Islands Antiquities Ephorate said it was the third tomb located in the area, following two discovered in 2009 during excavation to install the sewage pipes. Those finds had led to the discovery of 41 intact pottery vessels in very good condition, with inscribed decorations typical of the era, as well as pieces of roughly 10 more vessels, she said.

“The excavation conditions are extremely difficult because there are many springs in the area and the specific tombs, being carved into the rock, are prone to flooding. We needed pumps to empty the water. With great technical difficulty and significant assistance from the contractor we were able to investigate,” Kattoula said.