Archaeologists say a sacred burial site uncovered in Shrewsbury in February is over 4,000 years old. They say the site, which was discovered at a Greek Orthodox Church, may be the country's oldest-known continuously used sacred ground. 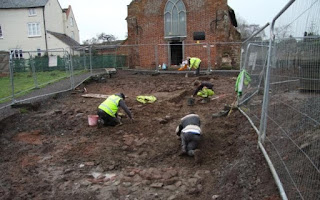 Finds suggest it has been used during every era since the late Neolithic period. Carbon dating of a wooden post extracted during the dig showed it was placed in the ground in 2,033 BC.

Archaeologists expected the post to be Anglo-Saxon. Other finds on the Oteley Road site included a calf, a pig and a dog that died while giving birth.

"The dates have shocked us all," said lead archaeologist Janey Green. "It appears the current Medieval church is built over the site of an ancient pagan burial ground that's been in use from the late Neolithic period through the Bronze Age, Iron Age, Roman, Anglo-Saxon and through to today. The only other British site of a Christian church that is known to date back to the late Neolithic period is at Cranborne Chase, in Dorset, but it is a Norman ruin."