Recent archaeological digs have uncovered more than 20 round buildings in what is believed to be Cyprus' earliest known village, dating as as the 9th millennium BC, the east Mediterranean island's Department of Antiquities said Tuesday. 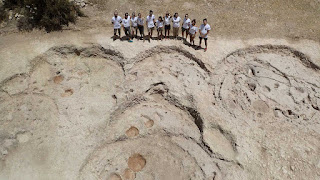 The excavation team at the site of Ayios Tychonas-Klimonas
[Credit: Department of Antiquities, Republic of Cyprus]

The department said in a statement that excavations, which concluded last month in the Ayios Tychonas-Klimonas area near Cyprus' southern coast, also found domestic dogs and cats had already been introduced to Cyprus when the village was active 11,200 to 10,600 years ago. It said villagers hunted small wild boar and birds, but didn't produce pottery.

Excavations directed by Francois Briois from France's School for Advanced Studies in the Social Sciences and Jean-Denis Vigne from France's National Center for Scientific Research-National Museum of Natural History found most buildings had built-in fireplaces as well as a 30- to 50-kilogram (66- to 110-pound) millstone.