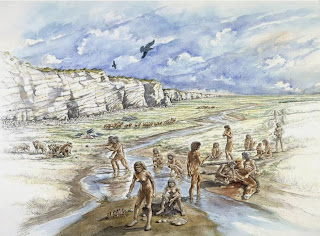 Stone Age Brits were past masters at choosing the perfect ‘des res’, according to new research carried out by archaeologists.

Their investigations have revealed that, 300,000 years before the emergence of anatomically modern humans, prehistoric Britons were selecting their domestic real estate with tremendous care.

Nutritional and security considerations appear to have been the main criteria, according to the new research carried out by scholars at the University of Southampton and Queen's University, Belfast.

A survey of 25 major British and north-west French sites dating from 500,000 to 200,000 years ago has revealed that early humans – members of the now long-extinct species Homo heidelbergensis – predominantly chose to live on islands in the flood plains of major rivers. They avoided  forests and hills – and the upper and middle reaches of river systems,  and their estuaries.
Read the rest of this article...
Posted by David Beard MA, FSA, FSA Scot at 10:24 AM