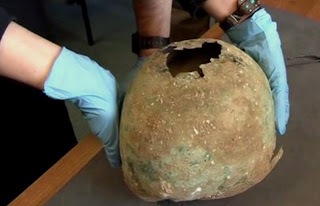 A rare Iron Age helmet unearthed by a metal detector enthusiast on farmland near Canterbury has been described as a significant find by the British Museum.

The bronze helmet was found with bone fragments, and had been used to hold human remains after a cremation, Canterbury Archaeological Trust said.

The finder contacted archaeologists because he was confident he had made a significant discovery, the trust said.

University of Kent experts have found it dates back to the 1st Century BC.