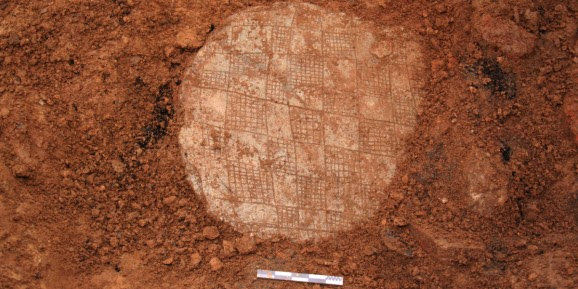 A slate disc decorated on both sides is believed to date to the later Neolithic, found at the Truro site Credit: Cornwall Council

Archaeologists working at the site of the future Truro Eastern District Centre (TEDC) have discovered the fragmentary remains of a prehistoric enclosure likely to have been built around 5,500 years ago.

Initial findings from the excavations, led by Cornwall Council’s Historic Environment Service, suggest the eastern end of the site may have been a ‘causewayed enclosure’ dating from the early Neolithic period (3800BC to 3600BC).
Now the team will catalogue their findings, take samples and, in line with national guidance, carefully re-bury the site to protect it for future generations.


“While it is important that we take the opportunity to learn more about our findings now, best practice is for the site to be preserved for future generations of archaeologists who will have better technologies to understand it than we do today,” said Dan Ratcliffe from the Council’s Historic Environment Service. “Scientific analysis of evidence recovered during the excavations is expected to take some years after the sample excavation has concluded.”