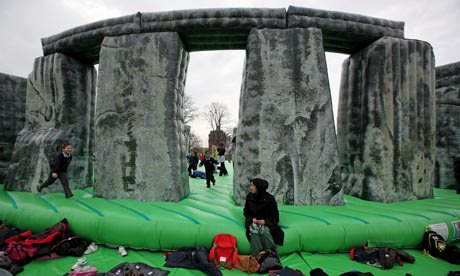 King of the bouncy castle ... Jeremy Deller's Sacrilege at Glasgow Green is part of the Glasgow international festival of visual arts. Photograph: Jeff J Mitchell/Getty Images
"It's a bit weird and random," says Michael Mclaughlan, 50, bopping gently up and down in the middle of the giant inflatable Stonehenge that has sprung up on Glasgow Green. "They should get Alex Salmond down here to bounce about."

Around him, children and adults are discarding their shoes and climbing tentatively on to the grandest of bouncy castles, a large-scale interactive work by the Turner prize winner Jeremy Deller. Titled Sacrilege, it's Deller's first major public project in Scotland and a centrepiece of the Glasgow international festival of visual art which launched on Friday.

"It's something for people to interact with, it's a big public sculpture," says Deller, who was on hand for the project's launch. "It is also a way of interacting with history and archaeology and culture in a wider sense.