Frogs' legs may have been English delicacy 8,000 years before France 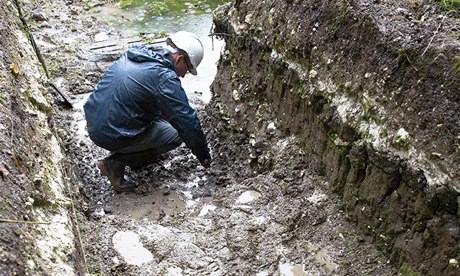 Blick Mead, near Stonehenge, where a charred toad's leg was found. Photograph: University of Buckingham/PA


If you're French, asseyez-vous, s'il vous plait. Archaeologists digging about a mile away from Stonehenge have made a discovery that appears to overturn centuries of received wisdom: frogs' legs were an English delicacy around eight millennia before becoming a French one.
The shock revelation was made public on Tuesday by a team which has been digging at a site known as Blick Mead, near Amesbury in Wiltshire. Team leader David Jacques said: "We were completely taken aback."
In April they discovered charred bones of a small animal, and, following assessment by the Natural History Museum, it has been confirmed that there is evidence the toad bones were cooked and eaten. "They would have definitely eaten the leg because it would have been quite big and juicy," said Jacques.
Read the rest of this article...
Posted by David Beard MA, FSA, FSA Scot at 8:13 PM