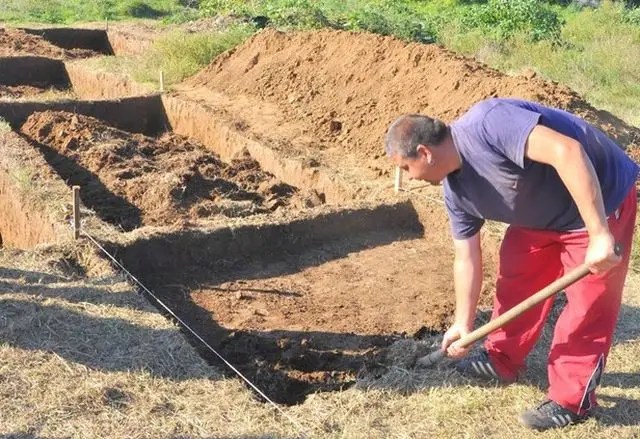 The 2015 excavations of the necropolis of the settlement of the “Culture of the Encrusted Ceramics of the Lower Danube” took place in mid October 2015. Photo: Monitor daily


A total of 10 graves from the necropolis of a Late Bronze Age and Early Iron Age settlement located near the town of Baley, Vidin District, in Northwest Bulgaria, have been discovered and explored during the 2015 excavations of the site which belongs to the so called “Culture of the Encrusted Ceramics of the Lower Danube”.
In one of the ten newly found graves, the archaeologists have found a total of 16 ceramic vessels, some of which are funeral urns, reveals Nikolay Kazashki from the Vidin Regional Museum of History, who is the deputy head of the archaeological expedition in Baley.
The excavations are led by Assist. Prof. Georgi Ivanov, and consulted by Assoc. Prof. Stefan Alexandrov, both of whom are from the National Institute and Museum of Archaeology in Sofia.
The newly discovered artifacts from the Baley necropolis, which dates back to 1,600-1,100 BC, are from three distinct chronological stages of the Bronze Age culture, reports the Bulgarian dailyMonitor.
Read the rest of this article...
Posted by David Beard MA, FSA, FSA Scot at 4:37 PM No comments:

Experts describe the discovery of tomb packed full of gold, silver and weapons, which sheds light on ancient Mycenaean and Minoan civilisations, as one of the most significant in decades

Flanked by a three-foot long bronze sword with an ivory handle and surrounded by a treasure trove of gold, silver and precious stones, he lay undisturbed for 3,500 years.
Now, the skeleton of an ancient Greek warrior, his tomb protected by a heavy stone slab, has been discovered by archaeologists in the Peloponnese.
Described as one of the most exciting discoveries in Greece for decades, the 30-35 year old man has been dubbed the “Griffin Warrior” after an ivory plaque depicting the half-lion, half-eagle mythical beast that was found alongside him.
Read the rest of this article...
Posted by David Beard MA, FSA, FSA Scot at 9:03 AM No comments: 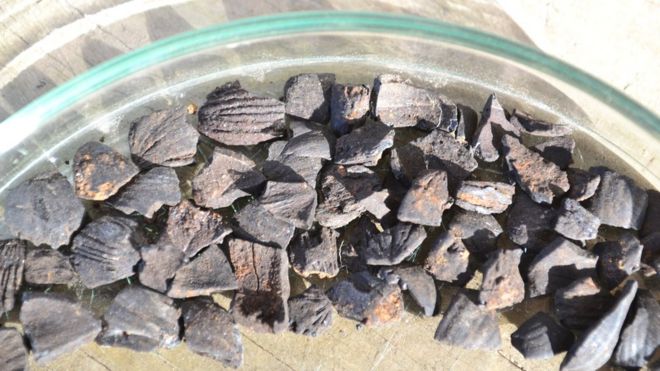 The remains of hazelnuts eaten by some of Skye's earliest inhabitants were found at a dig on the island, archaeologists have revealed.
Hazelnuts were a favourite snack of Mesolithic hunter-gatherers, according to archaeologists at the University of the Highlands and Islands (UHI).
The shells found at an excavation above Staffin Bay could be 8,000-years-old.
UHI carried out the dig along with Staffin Community Trust, school children and volunteers.

Read the rest of this article...
Posted by David Beard MA, FSA, FSA Scot at 4:51 PM No comments:

Plague traced back to Bronze Age 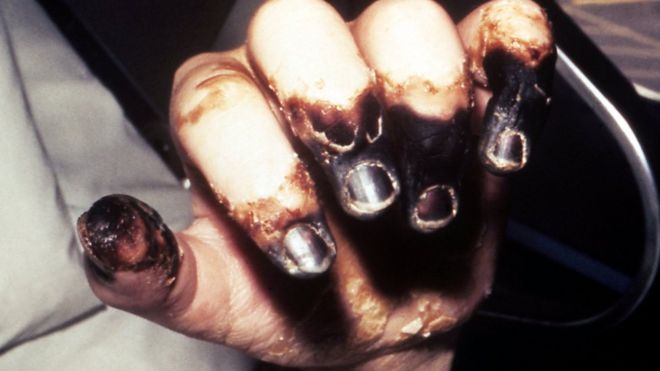 Plague has been a scourge on humanity for far longer than previously thought, ancient DNA shows.
Samples taken from the teeth of seven bodies contained traces of the bacterial infection in the Bronze Age.
They also showed it had, at the time, been unable to cause the bubonic form of plague or spread through fleas - abilities it evolved later.
The researchers, at the University of Copenhagen, say plague may have shaped early human populations.
Human history tells of three plague pandemics:

Read the rest of this article...
Posted by David Beard MA, FSA, FSA Scot at 11:46 AM No comments:


Archaeologists from the University of Reading have found the earliest dated evidence for human activity in Scotland - with a helping hand from a herd of pigs. 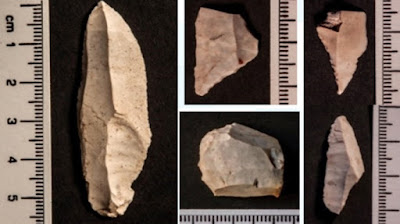 Some of the tools found by the archaeologists  [Credit: University of Reading]

The team made the remarkable discovery of a set of 12,000 year-old Ice Age stone tools while excavating Rubha Port an t-Seilich, on Islay in the Inner Hebrides in 2013. The tools include scrapers used for cleaning skins, sharp points likely used for hunting big game, such as reindeer, and much more.

While the dig involved highly skilled archaeologists they have another team, or herd, to thank for the discovery. Pigs foraging along the Islay coastline uprooted Mesolithic objects in 2009 which ultimately led to the start of the excavation.

Read the rest of this article...
Posted by David Beard MA, FSA, FSA Scot at 8:26 PM No comments: 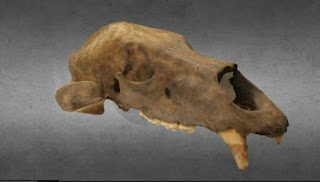 Read the rest of this article...
Posted by David Beard MA, FSA, FSA Scot at 8:24 PM No comments: 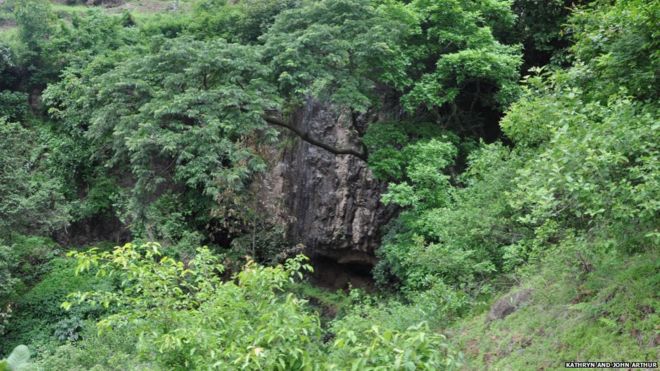 An ancient African genome has been sequenced for the first time.
Researchers extracted DNA from a 4,500-year-old skull that was discovered in the highlands of Ethiopia.
A comparison with genetic material from today's Africans reveals how our ancient ancestors mixed and moved around the continents.
The findings, published in the journal Science, suggests that about 3,000 years ago there was a huge wave of migration from Eurasia into Africa.
This has left a genetic legacy, and the scientists believe up to 25% of the DNA of modern Africans can be traced back to this event.
"Every single population for which we have data in Africa has a sizeable component of Eurasian ancestry," said Dr Andrea Manica, from the University of Cambridge, who carried out the research.

Read the rest of this article...
Posted by David Beard MA, FSA, FSA Scot at 7:56 AM No comments:


Ancient Britons may have intentionally mummified some of their dead during the Bronze Age, according to archaeologists at the University of Sheffield. 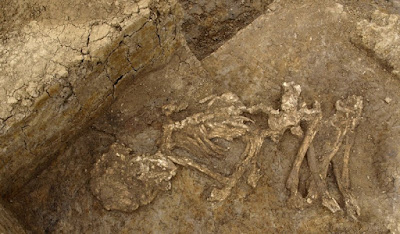 The study, published in the Antiquity Journal, is the first to provide indications that mummification may have been a wide-spread funerary practise in Britain.

Working with colleagues from the University of Manchester and University College London, Dr Tom Booth analysed skeletons at several Bronze Age burial sites across the UK. The team from the University of Sheffield’s Department of Archaeology found that the remains of some ancient Britons are consistent with a prehistoric mummy from northern Yemen and a partially mummified body recovered from a sphagnum peat bog in County Roscommon, Ireland.

Read the rest of this article...
Posted by David Beard MA, FSA, FSA Scot at 9:47 AM No comments:


Archaeologists in Orkney have uncovered the remains of over 30 buildings dating from around 4000 BC to 1000 BC, together with field systems, middens and cemeteries. The find includes a very rare Bronze Age building which experts believed could have been a sauna or steam house, which may have been built for ritual purposes. EASE Archaeology recently made the exciting discovery on the periphery of the prehistoric Links of Noltland, on the island of Westray in Orkney, next to where the famous ‘Westray Wife’ was found in 2009, which is believed to be the earliest depiction of a human face in Britain. The work is being funded by Historic Scotland, who are this week merging with the Royal Commission on Ancient and Historic Monuments of Scotland (RCAHMS) to form a new heritage body called Historic Environment Scotland. Work has been carried out at the Links of Noltland for several years now but the most recent discovery, and one of the most remarkable to date, is that of an almost complete and remarkably well-preserved, very rare Bronze Age building which experts believe had a very specialised function and was used by select groups for activities such as rites of passage or spiritual ceremonies.  It’s also possible that the building could have been used as a sweat house or sauna, for a number of activities ranging from basic healing and cleansing, or as a place where women could come to give birth, the sick and elderly could come to die, or where bodies were taken before burial.

Read the rest of this article...
Posted by David Beard MA, FSA, FSA Scot at 9:44 AM No comments: