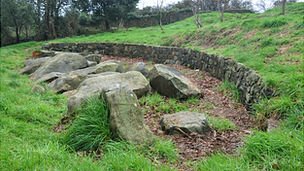 A Neolithic grave in Guernsey could be half-buried in soil and grassed-over to preserve it.
Guernsey Museums and Art Galleries has asked for planning permission to conduct the work in Delancey Park and put up an information sign.
States Archaeologist Dr Philip de Jersey said covering part of the stones would hopefully protect them.
He said: "People have lit fires in between them so they crack... there's been graffiti... we want to stop that."
The grave was discovered and excavated in 1919, 1932 and in the summers from 2009-2011.