Crossrail unearths evidence humans lived on Thames in 7,000 BC 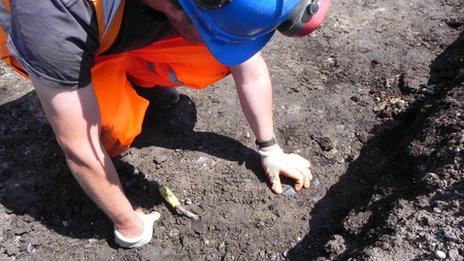 Rare evidence that humans lived on the River Thames 9,000 years ago has been discovered by archaeologists working on the Crossrail project.
A Mesolithic tool-making factory featuring 150 pieces of flint was found at the tunnelling worksite in Woolwich.
Archaeologists said prehistoric Londoners were using the site to prepare river cobbles which were then made into flint tools.
Gold has also been discovered at its site in Liverpool Street.
Archaeologists said they were mystified as to how such a precious and expensive gold item made its way to what was then regarded as a deprived area.
Read the rest of this article...
Posted by David Beard MA, FSA, FSA Scot at 7:23 PM