Ice Age Art at the British Museum: 'Not even Leonardo surpassed this' 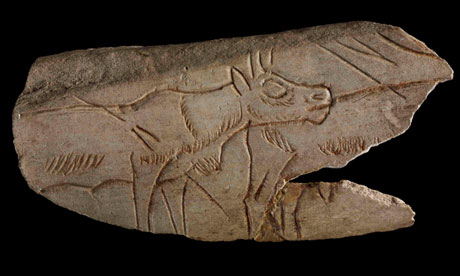 Human bodies in this show are overwhelmingly abstract, while animals are portrayed with gobsmacking accuracy … an image of a reindeer, carved into a reindeer bone, from Ice Age Art at the British Museum in London

I am looking at women with floppy breasts, massive hips and eyeless faces. Their bodies are deeply alien – disturbing in their total lack of what the modern world sees as desirable. Nearby, the British Museum has installed two nudes by Matisse, in one of many attempts in this exhibition to draw parallels between the earliest art and that of our own era. But this comparison just adds to the unease. To put it in language no archaeologist is likely to use: the curves of a Matisse woman are sexy; the bulges and blanknesses of these nudes, carved from ivory in central Europe 30,000 years ago, are not.
Then something catches my eye: a sculpture of a bison, created 21,000 years ago. It's so real, so alive, I can almost hear it snort and stamp. It has the same magical presence, the same thrilling realism, as cave paintings I've seen, also dating back to the ice age: images of mammoths, horses, bison. So why did the same artists choose to depict humans with such bizarre abstraction? It is one of the mysteries that make this show so eerie and thought-provoking.