Sheffield university helps to crack the mystery of Stonehenge - possibly


The famous circle may celebrate the end of Britain's forgotten east-west divide, long since replaced by the familiar one between north and south 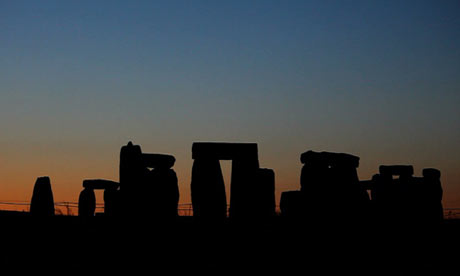 Come together. Was it Britain's prehistoric equivalent of the UN building in New York? Photograph: Felix Clay
Sheffield academics are good at collaring national attention. Witness the anxious appeals by radio listeners in the 1930s for scientists in the city to halt an atomic experiment on the grounds that it might bring about the end of the world.

Not long before, a Sheffield University lecturer in electrical research, Dr T.F.Wall applied for a patent for a means of transmitting electrical energy without wires – according to journalists at the time:


an invention capable of destroying life, stopping airplanes in flight and bringing motor cars to a standstill.


More positively, he added, it could have beneficial applications in surgery and medicine. Not to mention, which he couldn't even though he was so ahead of his time, wifi and the internet which have brought you this.

What now? Sheffield has played a leading part in a ten year research project on Stonehenge whose discoveries and conclusions have been gradually released since 2002 and have now come together in a book. Don't for a minute think that the main conclusion can be proved beyond doubt or that the report will end the age-old mystery. But it is plausible and based on a heap of archaeological material.